It seems that America is obsessed with comfort these days. Have you noticed all the mattress commercials? They all claim that their brand is the most comfortable and tell us that we need to replace our mattress every eight years to maintain that optimum comfort. One mattress store will even finance your mattress for eight years. (I don’t care how comfortable the mattress is, if you finance it, you’ll probably be up half the night worrying about making your mattress payment).

Don’t get me wrong, I’m probably more obsessed with finding physical comfort than most people. One of the most difficult things about being paralyzed by ALS is trying to get comfortable because my body is literally dead weight. There’s no turning over or even turning my head in order to get more comfortable when I go to bed. I recently got a new mattress, the one that I see the most commercials for, and it’s every bit as comfortable as the manufacturer claims, and I really do sleep better. (Don’t tell the mattress people, but the mattress I replaced was twelve years old).

So I really appreciate physical comfort, but…

It also seems that much of the Western world is seeking a more comfortable (politically correct…) form of Christianity. Even if I wanted to do so, I’ve concluded that I’m just not clever enough to make Jesus and the New Testament into something more “comfortable.” Even writing this post is out of my comfort zone.

Like a lot of non-Christians, before making a commitment to follow Christ, I viewed Christians as narrow-minded, judgmental and hypocritical. My cynicism about Christians (churchgoers) was so deep that, even after committing to follow Christ, I wanted nothing to do with church or churchgoers (“organized religion“). For about five months, I read the Bible for an hour or two every night. With no preachers or churchgoers to influence me, I learned to just take the Bible at face value – I became convinced that it is God’s word.

I eventually accepted an invitation to go to church and discovered that most Christians are not narrow-minded, judgmental or hypocritical. I also came to realize that non-Christians can be all of the things that I was accusing Christians of being.

How does one make words like Jesus’ above quote more “comfortable” for the Jew, the Muslim, the Buddhist, the Hindu or for anyone else of a different belief system? As I said, I’m not that clever. Even if we “speak the truth in love,” as the Bible instructs us to do, verses like this and so many others can be taken as fightin’ words by many people.

Jesus is not a unifier; He is the most divisive figure in all of history. Trying to make His words more “comfortable” will only serve to strip them of their life-transforming and hope-giving power. Besides that, people deserve honesty not comfortable condescension.

Other than His most devout followers, the only people that Jesus succeeded in unifying was/is His political and religious enemies: “Herod and Pilate became friends with one another that very day (the day they crucified Jesus); for before they had been enemies with each other.” (Luke 23:12). 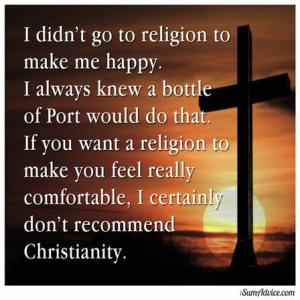 What would a “comfortable” (acceptable to all religious and political groups) “Christianity” look like? China has already given us the answer. The following are just some of the rules the Chinese state-approved “churches” have to follow:

Obviously the above is not Christianity, but sadly there are many churches in North America and Western Europe that could relocate to the middle of Beijing without having to change what they preach.

China is officially an atheist country, including the education system. But the truth is that China will soon have more Christians than any other nation on earth. The majority of these Chinese Christians meet secretly in house churches that teach the true message of the Gospel. They risk beatings, imprisonment, losing their homes, jobs and even their lives. Like the early Christians and so many oppressed believers around the world today, they’ve chosen the uncomfortable road.

With the increasing pressure from governments, the education system, the media and even some Christian denominations to make Christianity more politically correct and comfortable for all people, which road will you choose?

In 1996, at the age of 36, I was diagnosed with ALS. The neurologist gave me 3-5 years to live. 24 years later... :-) I'm completely paralyzed and unable to speak. By God's grace and the great care of my wife, I'm still here. I live to encourage and give hope to others going through difficult times.
View all posts by Bill Sweeney »