Standing Up For What You Believe

It’s so easy for Christians to feel that they cannot really make a difference for the Kingdom of God or even for improving the lives of people around them. When we’re going through difficult trials, the sense that we are useless to God and others is even greater. I know this first-hand, and I imagine that many of you have struggled with this also.

If you’re feeling insignificant, I hope this post encourages you to believe that you matter and to stand up for what you believe.

I’ve been reading through the New Testament, and I’m now in the book of Acts. I’ve read this book many times, but something new stands out to me every time. This time the thing that stood out to me was an ordinary man, someone that served meals to poverty-stricken widows but ended up changing the world.

I don’t think that even most Christians realize how much the early believers changed the world for the better. Not only did they spread the Gospel message, but they fed and clothed the poor, built hospitals and orphanages, and so many other ministries to help the needy and society’s outcasts. It all began with a waiter named Stephen in chapter 6 of the book of Acts.

Stephen and six other men were chosen by the Apostles to feed the widows – to literally serve them meals. First, men serving women in that culture (like many cultures today) was unheard of. At that time, all of the followers of Christ were Jewish (no Gentiles) but they were from many different parts of the known world. Stephen was Greek. The Bible doesn’t say, but I suspect that Stephen’s mother was one of the poor widows that he was serving meals to.

“Pure and lasting religion in the sight of God our Father means that we must care for orphans and widows in their troubles…” (James 1:27)

Many of the Jews that rejected Jesus as the Messiah became frustrated and jealous of the Christians because – “The word of God kept on spreading; and the number of the disciples continued to increase greatly in Jerusalem, and a great many of the priests were becoming obedient to the faith.” (Acts 6:7)

One day, these highly-educated religious men decided to take their frustrations out on the young servant named Stephen. They were going to use him to prove to the gathering crowd that the followers of Christ were misled and finally put an end to this new movement that was then referred to as “The Way.” They began by using scripture to make their case, “but they were unable to cope with the wisdom and the Spirit with which he (Stephen) was speaking.” (Acts 6:10)

When the crowd saw that Stephen was winning the debate, the religious leaders became even more frustrated and began falsely accusing Stephen of all kinds of horrible things, including blasphemy. At the peak of their anger, they carried him out of the city and stoned him to death. The young waiter’s last words were, “Lord, do not hold this sin against them.” (Acts 7:60)

Stephen became the very first Christian martyr. Over the two thousand years since his death, millions of Christians have paid the ultimate price for standing up for their faith. 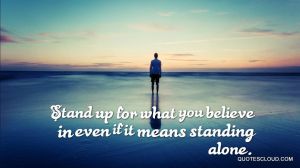 It was a Jewish leader by the name of Saul that was urging the crowd to stone Stephen. That day, because of the stance of this faith-filled man and the persecution that followed his death, many Christians fled Jerusalem and began spreading the gospel message and doing good works throughout Asia, Africa and Europe.

With permission from the Jewish authorities, Saul began hunting these Christians down.

As most Christians know, after an incredible encounter with Christ while hunting for Christians, Saul himself became a follower of Christ and was transformed into the man we now know as the Apostle Paul. It was Paul that became the Apostle that would carry the gospel message to the Gentiles, including to the people of Greece, very likely some of Stephen’s relatives. Years later, Paul would also be martyred for defending God’s word.

It all began with a humble waiter standing up for what he believed.

In that day, and still some parts of the world today, defending the Christian message might lead to imprisonment or even martyrdom, but in most places we’ll just be told to shut up. Sadly, many of those who call themselves Christians don’t stand up for Christ even when the only cost is being ridiculed.

Stephen’s story shows us that God works through ordinary people. We don’t need to be a pastor or a theologian to make a difference for Christ. Even if you’re a new Christian or you feel spiritually weak, start small and God will expand your work. 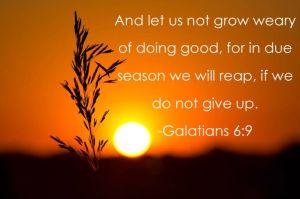 In 1996, at the age of 36, I was diagnosed with ALS. The neurologist gave me 3-5 years to live. 24 years later... :-) I'm completely paralyzed and unable to speak. By God's grace and the great care of my wife, I'm still here. I live to encourage and give hope to others going through difficult times.
View all posts by Bill Sweeney »